Edna Neel Bloodworth, 96, passed away peacefully in her home in Searcy, AR, Wednesday, December 21. Born September 16, 1926, in Beatrice, Nebraska to Cecil Neel and Alice Nickel Neel, she was the second of nine children in her family. Thus, she became alm
Thursday, December 29th 2022, 4:52 PM CST 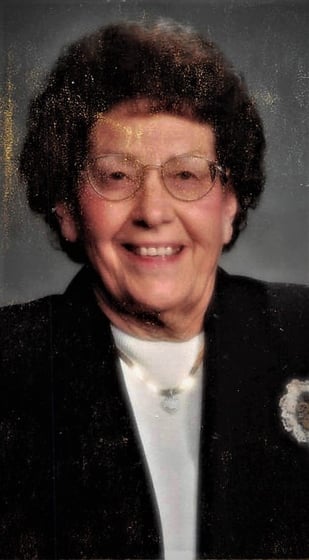 Edna Neel Bloodworth, 96, passed away peacefully in her home in Searcy, AR, Wednesday, December 21. Born September 16, 1926, in Beatrice, Nebraska to Cecil Neel and Alice Nickel Neel, she was the second of nine children in her family. Thus, she became almost a second mother to rest of her siblings, even to the point of collecting and boiling water for the births of some of her youngest. The family was responsible for running a farm for the owner, so learning the rewards of hard labor came early and often. Still, she talked of the fun on the farm enjoying simple things as a child.

Thanks, to a family “down the road” she was introduced to the Nazarene church and that church family helped her “find work” in town. This allowed her to save enough money to take the bus to attend Bethany Nazarene College in Oklahoma after high school graduation.  She was the only child in her family to attend college. There, she worked for the Dean of the college to earn tuition and later met her husband to be and became a minister’s wife in several different Nazarene churches for over 25 years.

Thanks to her encouragement, her two sons went to work early in life, allowing her to begin a career working at various jobs. Starting at Fred’s Dollar store where she could walk to work, then the Safeway egg plant, she then retired after 17 years of employment with the Arkansas Department of Human Services. She started volunteer work at White County Memorial Hospital who then hired her for several years. After retiring from the hospital, she concentrated more on her yard and garden work at the home she purchased and paid for with her earnings. She was so meticulous at all endeavors and loved her flower garden and decorating her house for even the smallest of holidays. She stored boxes and boxes of decorations in specific places in the attic. When health would not allow, using her sons or various helpers, she would instruct them where to place the boxes and a year later could tell you exactly where to retrieve them before you ascended the stairs.

She loved to entertain family, church family, and her Extension Club in her home but was also very independent, traveling unaccompanied on cruises, bus tours of the country and even driving alone to see family in Oklahoma and Nebraska a long as her health would allow.

The family would like to extend a special thank you to Cindy Miller, Cindy Pankey and Peggy Duncan, for their aid which allowed her to stay in her home until the end.

Visitation will be held on Monday, January 2, 2023, at 11:30 A.M. followed by funeral service at 12:30 P.M. at the Searcy Church of the Nazarene, Searcy, Arkansas. Arrangements in Arkansas entrusted to Searcy-McEuen Funeral Home.  In lieu of flowers, the family asks to please donate to your favorite charity. Graveside services will be held on Thursday, January 5, 2023 at 3:00 P.M. at Evergreen Home Cemetery of Beatrice with Pastor Frank Torres officiating. www.foxfuneralhome.net  Arrangements entrusted to Fox Funeral Home & Cremation Services of Beatrice.