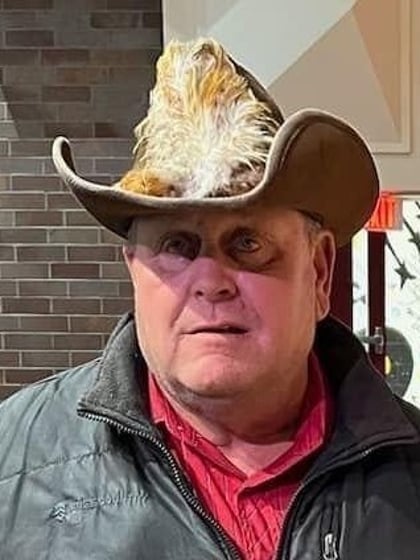 Fred enjoyed a wide variety of ways to spend his time when he wasn’t working. He was most at home in the saddle on one of his many horses.  Fred, usually dressed in his cowboy attire, spent countless hours going for rides on the country roads of Jefferson County.  Fred also found enjoyment in watching western and action movies.  He could easily tell you all the actor’s stage and given names without hesitation.  If there was an auction or nearby flea market, he usually made it a point to “investigate” to see if any bargains were to be had.  Auction sales were part of Fred’s entire life, attending with his parents and always was there to help “lift the heavy stuff” at the end of the day. Fred kept current on the local events by attending Fairbury High School sporting and non-sporting events, attending county and town meetings, and reading at least 2 newspapers daily.  Often, Fred would pen his opinion to the local newspaper about a variety of issues that he felt needed to be addressed.  Fred thoroughly enjoyed going to the new Fairbury City swimming pool, not only to swim a little, but because he could once again dive off the high board like he did in his much younger years.  Fred was a life-long member of the First Christian Church in Fairbury, where he was proud to be the bell ringer on Sunday mornings.  And, as most of us who knew Fed, he enjoyed a good ol’ fried chicken dinner.  Fred had numerous printed menus from most nearby restaurants pinned to his apartment wall.  He wanted to make sure he knew what day of the week they had their chicken specials so he wouldn’t miss a chance at his favorite meal. Fred would often travel throughout the eastern half of Nebraska and western third of Iowa.  He loved to be behind the steering wheel and just drive.  Fred wanted to take in all the sights and events of large and small towns that he had never been to. And Fred found most of them! “Fred F” was often spotted heading down highways and interstates to his next big adventure. Though health issues had become part of Fred’s daily life lately, he lived every day to the fullest. Fred will definitely be missed.

Survivors include numerous cousins and a host of many friends

Services will be Saturday, December 31, 2022 at 10:30 a.m. at the First Christian Church in Fairbury.  Gerdes-Meyer Funeral Home is assisting with arrangements.  www.gerdesmeyerfh.com