Jaz Shelley erupted for 31 points to lead three Huskers in double figures, as a short-handed Nebraska women's basketball team rolled to an 82-54 win over Wisconsin at Pinnacle Bank Arena on Wednesday.
Thursday, December 8th 2022, 4:44 AM CST
By NU Athletic Communications 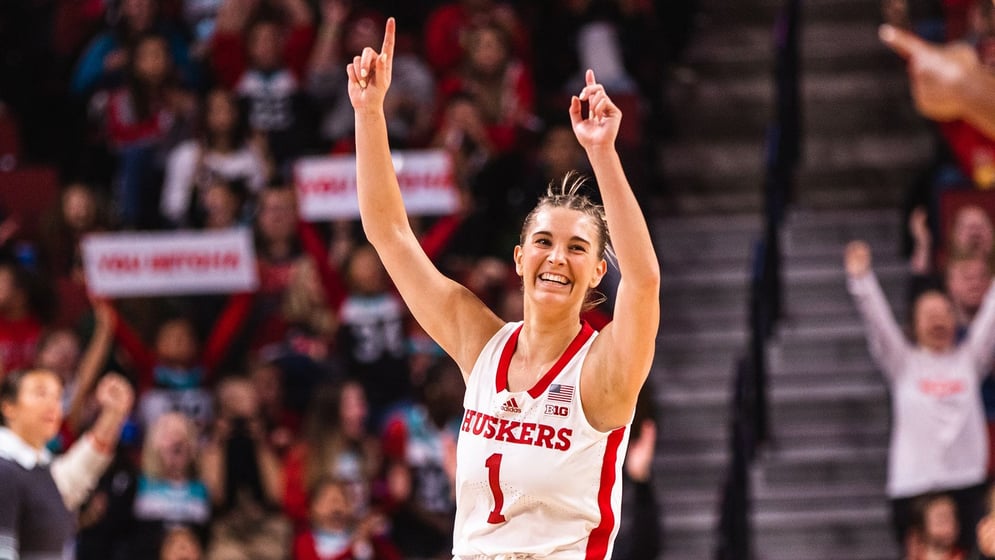 Jaz Shelley celebrates her halfcourt buzzer-beat at the end of the first quarter.

Lincoln - Jaz Shelley erupted for 31 points to lead three Huskers in double figures, as a short-handed Nebraska women's basketball team rolled to an 82-54 win over Wisconsin at Pinnacle Bank Arena on Wednesday.

Playing without three starters because of injuries, Nebraska improved to 2-0 in Big Ten play by knocking down 13-of-28 three-pointers, including 7-of-12 shooting from Shelley. The Huskers, who moved to 7-3 overall, got 13 points from Shelley in the first quarter alone to sprint to a 24-10 lead after one period. Shelley, who hit three threes in the quarter, capped Nebraska's 15-0 run to end the period with a half-court buzzer-beater, as she finished with 10 points in the final 2:45 of the quarter.

Shelley, who added five rebounds and four assists on the night, has opened Big Ten play by averaging 30 points in Nebraska's two wins, including a 29-point performance in Sunday's victory at No. 20 Maryland. Shelley has scored her 60 total points on just 36 total field goal attempts.

In addition to Shelley's huge night, Nebraska got 13 points, five rebounds, seven assists, a block and a steal from Allison Weidner. The sophomore guard scored her 13 points on just seven field goal attempts.

Annika Stewart put three Huskers in double figures with 10 points on 4-of-5 shooting. Stewart, a 6-3 forward/center from Plymouth, Minn., made her first career start in place of Isabelle Bourne, who suffered an upper body injury in practice on Tuesday and was unavailable for Wednesday's game.

Nebraska, which was also without three-year starter Sam Haiby for the ninth time in 10 games this season, had just eight available players against the Badgers. Trinity Brady, who was starting in place of Haiby through the first eight games this season, missed her second straight game after being hit with an elbow in the right temple in the first half at No. 9 Virginia Tech on Dec. 1.

Sophomore Kendall Moriarty also stepped up off the bench for the Big Red, scoring a career-high nine points including a pair of three-pointers. Kendall Coley added six points with a three-pointer and a traditional three-point play, while Maggie Krull pitched in four points and five assists in her second Big Ten start.

After building a 14-point lead at the end of the first quarter, the Huskers saw the Badgers briefly cut the margin to nine points at 29-20 midway through the second quarter. The Big Red responded with an 8-0 run down the stretch with five points from Weidner and Moriarty's first three-pointer of the night to send the Huskers to halftime with a 39-23 lead.

The Big Red then put the Badgers away early in the third, getting four straight points from Markowski and Weidner to cap NU's 12-0 run dating back to the first half, before Stewart and Shelley combined to hit three straight three-pointers to push Nebraska's lead to 52-28 less than three minutes into the second half.

Nebraska's 28-point margin to close the game was its largest.

Serah Williams scored a team-high 18 points for the Badgers including 8-of-15 from the field. Avery LaBarbera added 17 points to give the Badgers two players in double figures. The Huskers held Wisconsin's leading scorer Julie Pospisilova without a point, while UW's Maty Wilke did not make the trip to Lincoln.

Nebraska continues regular-season home action on Saturday when the Huskers play host to Samford. Tip-off between the Big Red and the Bulldogs is set for 6 p.m. (CT) with tickets available now at Huskers.com. Live television coverage will be provided by Nebraska Public Media, and free live audio will be available from the Huskers Radio Network on Huskers.com.