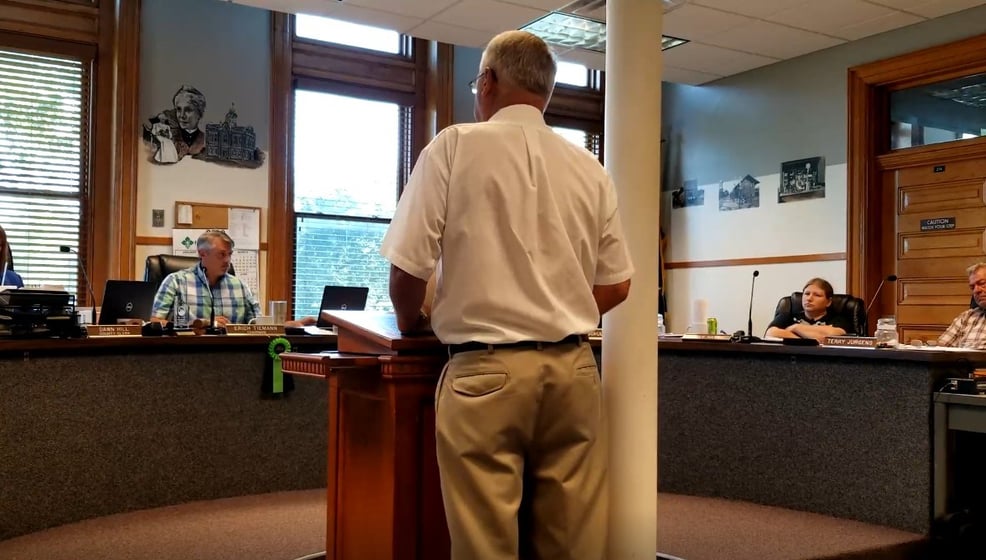 BEATRICE – The Chairman of the Gage County Democrat Party raised concerns before the Gage County Board Wednesday, of a flag carrying a vulgar depiction of the President of the United States…..during the recent county fair “Eve of Destruction” event.

Dave Anderson, of Odell, a former county supervisor, said a flag reading “F___Biden”…with the words completely spelled out and other vulgar displays caused a letter of concern by the county’s Democratic Caucus to be written to the Gage County Fair Board.

"As community members, taxpayers, parents, grandparents and of course, Democrats...we were appalled that such a large, prominent, vulgar, totally inappropriate display would be allowed at a family-friendly venue....especially since Four-H youth were given free passes to the event. One would hope the Ag Society/Fair Board would not accept or condone the cultural and moral depravity of public discourse that is being forced upon us by certain political groups, even in our own county."

Anderson said he was directed by the caucus to write the letter. He noted that the county board, in essence, oversees the county fairgrounds through setting a budget and tax levy for the agricultural society.

"We recognize your organization....this is the fair board....has and will continue to contribute much to our county and is a major asset to our community. It would be our hope that you would take corrective action in the future and review past supervisory performance during any event held on public, Gage County property."

Anderson said the recent Diller Picnic parade committee faced a similar vulgar flag attached to the rear of a semi-truck that was to be driven through the parade there.  Complaints about that, he said, prompted parade organizers to intervene.

"The disgusting banner was removed from that vehicle before the entry was allowed to pass through the parade. To me, that shows a difference in the level of leadership and supervision....and would hope that all would take this seriously in the future."

Flags or banners critical of President Biden with vulgar language have appeared at other places throughout the Midwest. Former President Trump has claimed the 2020 presidential election was fraudulent and stolen from him….despite ample evidence to the contrary.