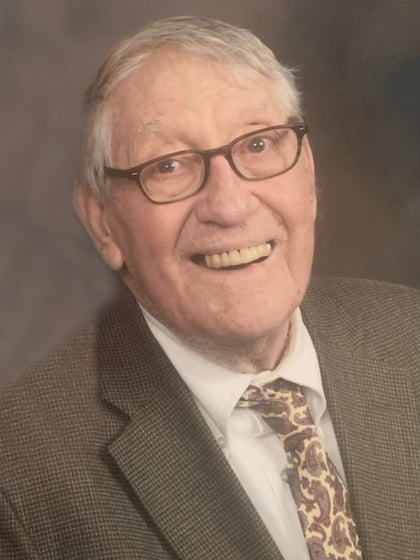 Donald F. Killman, 85, of Beatrice passed away on Wednesday, Jan. 18, 2023, at St. Luke’s South Hospital in Overland Park, KS, with his children by his side.

Born Jan. 21, 1937, in Greenleaf, KS, Don attended Greenleaf High School and participated in track, football and basketball. He attended Fairbury College where he also participated in sports for two years before serving in the US Army from May 1957 to May 1959. While in the Army he was stationed at the Pentagon in Washington, DC.  After his discharge, he worked at AB+T Grain Co. in Topeka, KS, as an office manager.

Don later attended Washburn University, where he graduated with a bachelor’s degree in commerce. After graduating, he taught school and coached basketball in Jamestown, KS, and later at Tri County in Dewitt, NE. In May 1968 he started working for New York Life Insurance Co., a job he would remain in for 40 years before retiring in January 2009.

It was in college that Don met Diana Nelson and they were married on June 18, 1961, in Davenport, NE, sharing almost 62 years together before Diana’s passing in December 2022. To this union three children were born: Susan, Mark, and Amy. Don and Diana loved to follow their children to sporting events and other activities. Later in life Don and Diana would make frequent trips to Kansas City in support of their six grandchildren, cheering them on at baseball, basketball, football, volleyball, and soccer games.

Don was a huge KU basketball fan and loved his New York Yankees. After retiring, he enjoyed having morning coffee with his friends in Beatrice, often teasing them while wearing a KU jacket as a reminder of their basketball success.

He was a member of St. John Lutheran Church and had been on the parish board, an usher and a greeter. He also was a former Jaycee member and a member of the Beatrice Sertoma Club.

Don was a fighter and survived COPD, lung cancer, a stroke, and a heart attack.  However, he was not able to overcome the heartbreak of losing his soulmate of 62 years and died of a broken heart less than a month after his beloved Diana passed.

A private family memorial service and burial will take place at the Evergreen Home Cemetery of Beatrice on Monday, Jan. 23, 2023. A memorial has been established to the family for future designation. www.foxfuneralhome.net    Arrangements entrusted to Fox Funeral Home & Cremation Services of Beatrice.