Huskers Fall to No. 14 Hoosiers

Big runs in each half powered No. 14 Indiana to an 81-65 victory over the Nebraska men's basketball team Wednesday night at Assembly Hall in Bloomington, Indiana.
Thursday, December 8th 2022, 4:46 AM CST
By NU Athletic Communications 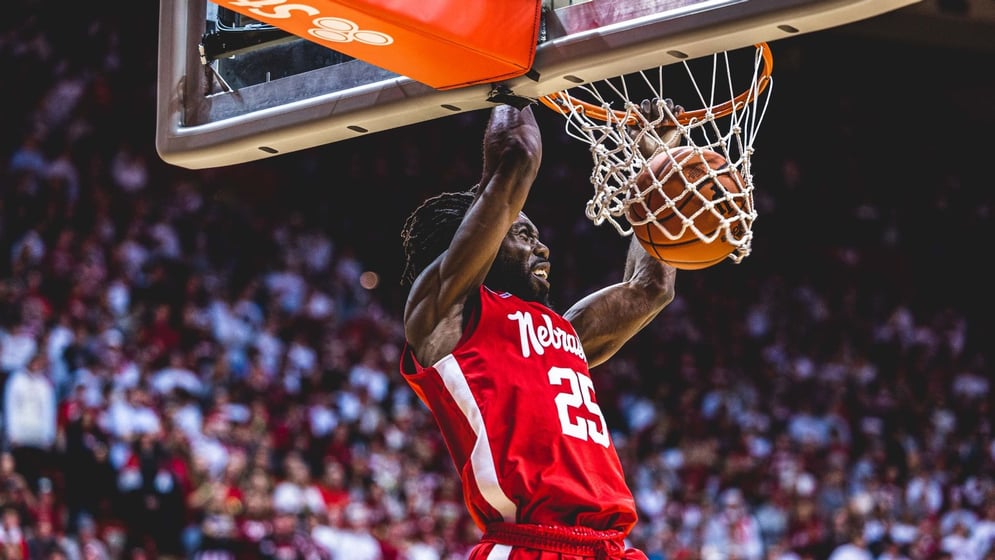 Emmanuel Bandoumel had 13 points in a team-high 35 minutes.

Big runs in each half powered No. 14 Indiana to an 81-65 victory over the Nebraska men's basketball team Wednesday night at Assembly Hall in Bloomington, Indiana.

The Hoosiers opened the game on a 14-2 run en route to building a 13-point halftime lead. In the second half, Nebraska twice trimmed the lead to seven before Indiana put the game away with a 14-0 run that gave the Hoosiers an 21-point advantage.

Nebraska, which had won its last three road games against ranked opponents dating back to last season, dropped its Big Ten opener and fell to 6-4 on the season. Indiana improved to 8-1 and evened its conference record at 1-1.

The Huskers, who were without starting point guard and second-leading scorer Sam Griesel, had four players in double figures led by C.J. Wilcher, who scored 17 of his career-high 22 points in the second half. Emmanuel Bandoumel had 13 points, while Derrick Walker and Keisei Tominaga chipped in 11 points each. Walker also grabbed five rebounds and dished out five assists, while Juwan Gary led Nebraska with seven rebounds. Nebraska shot 43 percent in the game, but the Huskers were just 6-of-23 from the 3-point line.

Trayce Jackson-Davis posted a triple-double for Indiana with 12 points, 11 rebounds and 10 assists. Trey Galloway led the Hoosiers with 20 points, one of four Indiana players in double figures as IU's 81 points were the most allowed by Nebraska this season. Indiana shot 53 percent from the field, the highest mark by a Husker opponent this season.

Nebraska missed nine of its first 10 shots to begin the game, allowing Indiana to jump out to the 14-2 lead. Bandoumel was the only Husker to score over the first nine minutes, scoring five points. Indiana led 22-7 halfway through the period before Nebraska scored six of the next eight points to trim the lead to 24-13.

The Huskers cut the deficit to single digits with a 6-0 run that made it 30-21 with just under five minutes remaining in the half. But Nebraska missed four of its final five shots of the half and Indiana closed the period on a 7-2 run to take a 39-26 lead into the locker room.

Nebraska was 9-of-17 from the field over the final 11 minutes of the first half, but a 2-of-13 start limited the Huskers to 37 percent shooting in the opening period. NU was just 3-of-13 from beyond the arc, while Indiana shot 53 percent (17-of-32) in the first half. The Hoosiers also had a plus-12 advantage on the glass. Bandoumel (10 points) and Walker (9) combined for 19 of Nebraska's 26 first-half points.

NU came out strong to start the second half, scoring the first six points of the period to cut the lead to seven. But Indiana responded with a 9-2 run over the next four minutes, pushing the lead to 48-34. The Huskers would not go away, as Wilcher answered Indiana's run by scoring seven straight points, once again trimming the lead to seven with 13:35 to play. That proved to be as close as Nebraska would get, as the Huskers missed five straight shots during Indiana's decisive 14-0 run.

Nebraska's run of four consecutive games against ranked opponents continues on Saturday, when the Huskers host No. 4 Purdue at Pinnacle Bank Arena. Tipoff is set for 1:15 p.m. with television coverage on the Big Ten Network and radio coverage courtesy of the Huskers Radio Network.